Peace in this Makahiki Season. 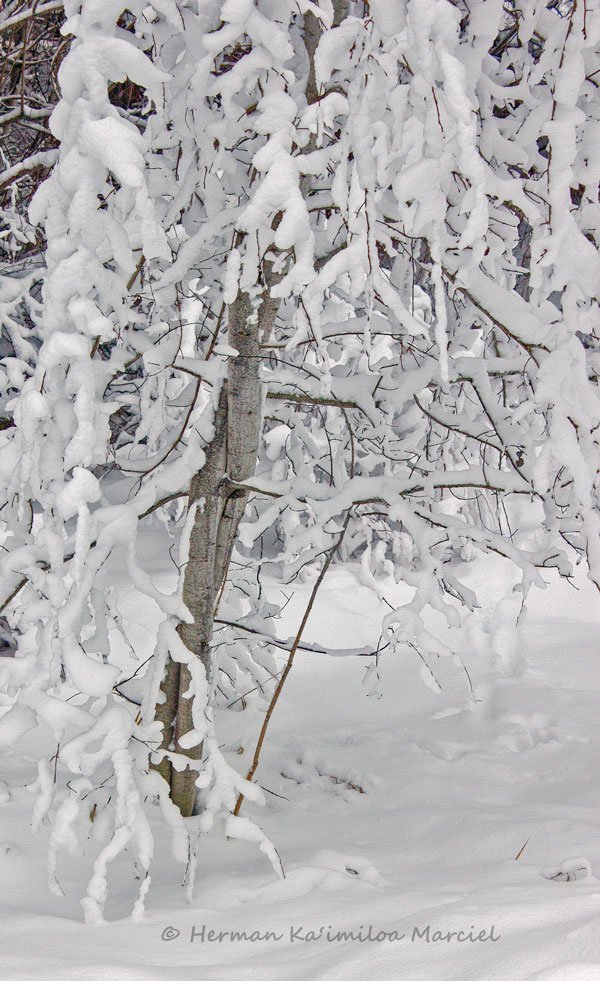 Kākoʻo, Support ~~ Two trees have grown with their trunks intertwined. For all of their lives they have supported each other.

In pre-Western contact times, when the first new moon was sighted after the constellation Makaliʻi (Pleiades) rose at sunset, the Makahiki Season began.

For four months, between October/November and February/March, Hawaiians celebrated and gave thanks for the harvest. It was a time to bond together,  strengthen relationships and share. This was a time to pay taxes, play games, cut back on work and enjoy peace as war was forbidden. The games, however, were designed to keep warriors in top shape should their skills be needed for battle after Makahiki.

This was also when Lono, the God of thunder and lightening and of clouds and rain, was honored.  He is also the God of agriculture and harvest and of peace and fertility.

An interesting fact of history is that Captain Cook arrived in the Hawaiian Islands during the Makahiki season. The Hawaiians were looking for the return of Lono who was reported in myths to have departed Hawaiʻi long ago. Each year at Makahiki, they waited for his return. Cooks  arrival in tall ships led those on shore to believe that Lono had returned. Eventually Cook, the explorer-god was killed in battle leaving the population to continue to wait for the return of the real Lono.

Why, you may ask, do I use two trees wrapped in each other and a winter blanket to represent Makahiki? Well, Makahiki is celebrated during hoʻoilo, the wet season or winter. It is a time of coming together for celebration and to support one another.

This image, that I have named Kākoʻo, Support, was taken near Silver Lake in Eastern Washington State. In Summer or Winter, I have always viewed these trees as supporting each other. Would they be bowed like others in this area if they were not bound together. They have been a sign of giving each other life. Now in hoʻoilo, winter, they continue to give each other support.

The trees also convey the image of wrestlers with their legs, arms and bodies intertwined as though they were playing in Makahiki games.

Maluhia i kēia Wā Makahiki, Peace in this season of Makahiki.

Posted in Information, Spirituality | Comments Off on Maluhia i Kēia Wā Makahiki