The Dawn of Creation 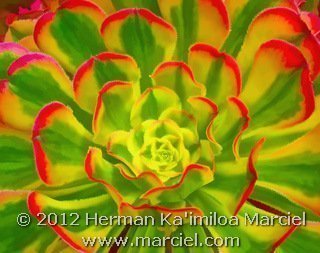 In a Hawaiian legend, the god, Käne, lives alone in the continual darkness, pö loa, in the first era of creation. In the second era, with the help of the gods Ku and Lono, this triad creates light, the Heavens, the Earth, the celestial bodies and finally mankind.

The Hawaiian Creation Myth, The Kumulipo, Source of Life, tells of the time in winter when the sun didn’t shine at all and there was darkness, pö. It was in the dark that the slime that established the Earth was formed. Out of this primordial dampness comes all life forms.

The Maori, ancient relatives of the Hawaiians, tell the story of Nga Tama a Rangi. Here Rangi, the heavens, and Papa, the earth, unite in darkness to create offspring gods. Their children long to see light and then hatch a plot that leads to a cosmic struggle and to their freedom. The freed children are then recognized as the gods of different elements of the earth.

The Egyptians told a number of creation myths. Hieroglyphic records from the ancient city of Hierapolis tell the story of when the world was a swirling watery chaos. Out of these waters rises Atum, the sun god, who then begins the process of creating other gods and the world. In other Egyptian accounts, creation begins with the appearance of the sun god Ra.

Most are familiar with the Hebrew myth of creation. Here, a God creates and gives names to the elements of creation. A unique contribution of the Hebrew account is that the god is a singular God who creates out of the chaos, water and darkness. Like other creation myths, light is created on the first day. Note that the luminary bodies don’t appear until the fourth day of creation.

Lagoon Nebula from the Hubble Telescope

Into the fray jumps modern science. Through discoveries in astronomy and physics, scientists now believe that the universe began 13 to 15 billion years ago. The prevalent theory is that it began with a big bang. (Sorry. This has nothing to do with the hit television show of the same name.) The theory says that this event was not like a conventional explosion. Rather, this was an explosion of space within itself, a sudden unique expansion. The void, the abyss or the darkness was filled in the smallest fraction of a second with light and the beginning elements of the universe. This was the dawn of the creation.

And, there is proof that this expansion is still happening. One of these proofs is in a measurement called “redshift.” The redshift happens because as an object moves away in relation to the earth, the wavelength of the light is observed to be stretched. The light is seen as “shifted” toward the red part of the spectrum. This redshift is measurable by comparing the light from distant galaxies to the light from our sun. A simple, earthly example is how you hear the change in pitch of a siren as a vehicle speeds toward and then away from you.

One thing that science says it cannot explain is what was the void before the big bang and how the creation event was triggered.

Original image for Dawn of Creation

These were my thoughts when I created the “Dawn of Creation” image. I started with a picture of an Echeveria plant. I boosted the saturation of the colors to get the red to the desired value. This emphasizes the shift in size of the red tips as the plant expands.

I then separately adjusted the saturation of the weaker colors to balance the color values. To get the feeling of motion, I added a smoothing texture to the overall image. Since I wanted the edges of the plant to be defined, as in the leading edge of the creation event, I sharpened the red edges. The final adjustment made was to re-enhance the definition of the very center as it was smoothed in the texturing process. This was done with a filter that outlines edges and it was applied only to the very center of the flower.

I ended up with an image that is filled with a pattern of light expanding outward, the Dawn of Creation.

PS. Many have asked about the cover photo for the main page of the blog. I will be discussing my interpretation of impressionistic and interpretative photography next.

This entry was posted in Photo Details, Spirituality. Bookmark the permalink.

1 Response to The Dawn of Creation