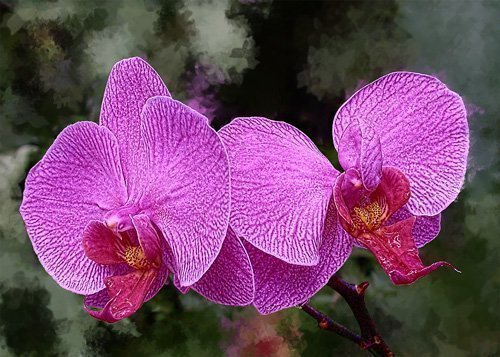 True to my vision in photography, I want to interpret what is presented before me and try to tell a story. Many artists have a set style that can easily be used to identify their work. My style is that I don’t have a set style. Sometimes I use a heavily manipulated look. At other times, I do little to enhance the photo. I always want to let the subject dictate the treatment.

About the only place you will find an identifying signature style is in my flower photography. I love photographing flowers. There is so much beauty packaged into a delicate frame. My favorite method for treating flowers is to extract the flower from the image on the computer, treat the background to achieve an effect and then replace the flower into the image. Often the flower is untreated. But, if the flower is asking me to convey a thought, I will do something.

The best way to explain what I do with flowers is to give examples.

The Phalaenopsis Orchid image above was taken at a botanical garden on the Island of Hawaiʻi. There was another flower in the background that was out of focus but distracting in the photo. I applied an art brush effect in Photoshop to the background. I left the brushed in color from the background flower to add depth to the image. Since there was a lot of texture in the Phalaenopsis Orchid, I chose to emphasize this texture in the final printing. It is as though the flowers are saying, “Look at me.” 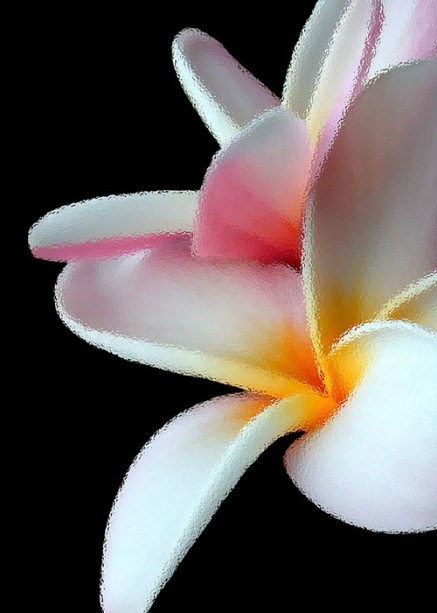 A favorite image of a lot of people is my picture of two Plumeria that I call The Dance.

I was driving down Kailua Road one day and saw these Plumeria blossoms dancing in the breeze on the tree. I jumped out of the car and captured their embrace. I changed the background to black to provide the idea of a more intimate setting. To give the illusion of motion, I added a simple glass crackle look to the edges of the flowers. 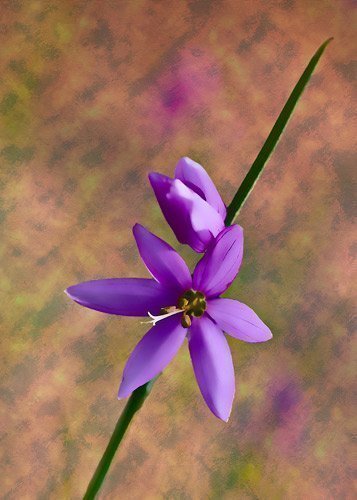 Each spring at our house in
Spokane, the wild flowers would burst into bloom. Among them were the Grasswidows. Technically they are Olsynium douglassii. But, I didn’t want to get technical with this beautiful wild iris. In the late afternoon or early morning, when the sun was low, the patches of these flowers would light up and glisten in the sun.

I tried to photograph them dozens of times but was never able to capture what my mind’s eye had seen. The field would be full of the color of thousands of blossoms. Yet,  the flowers were asking to be treated as individuals. How would I capture the blur  of color, the individual flower and the warmth of the setting sun in what was often an ethereal setting?

One day I was looking at images of paintings by Monet of fields of wildflowers that he had done. His paintings gave me the feeling of running through the fields with my shoes off. I knew what I wanted to do.

And so, my image of Early Spring was born.

I started this post saying that, for the most part, I worked on the background of my flower images and dropped the flower back into the scene unprocessed. And the first  examples show that I do also work on the flower itself. 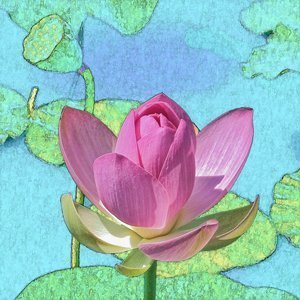 With this image of Enlightenment, we go back to my original statement. Here is an image that has the background heavily interpreted and the flower intact.

In ancient Egypt, the lotus flower was said to have given birth to the sun. Because the flower closes its petals at night and reopens them during the day, this became a symbol of creation and rebirth.

With this in mind, I created my image as a pure and bright flower set against a background that is lacking in refined detail. The background was given a minimalist, almost line-drawing effect.

My lotus rises out of incompleteness to enlightenment.

The Hau plant was brought to Hawaiʻi by the first settlers. This light-weight, tough wood had many uses and was thus worthy of being brought along in the canoes. The Hau has a bright yellow flower that opens in the morning. As the day progresses, the blossom starts to turn orange. You will often see these blossoms on the tree and on the ground in the 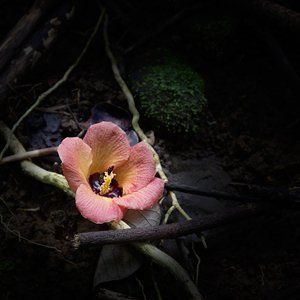 afternoon. Mary Ann was the one who noticed this beauty while on a hike to Twin Falls on Maui.

In Hawaiian mythology, there are many gods and goddesses. These deities often are represented by their kino lau, the material embodiments of the divine. The Hawaiians did not know of a god who was not intimately involved with their daily lives. Since everything is sacred and had mana,  the gods and goddesses must be manifesting themselves in bodily forms in all that surrounds us.

The hau plant was considered to be the kino lau of Lupea a sister of Hina, the goddess of the moon. In my image, I have presented the flower as being a bright spot in the dark. When we look at this picture, I want you to think that Lupea is visiting Hina on the moon in the darkness of the night.

The effect was achieved by adding a layer of black over the whole image and then painting away the black and exposing the image of the flower and allowing the background to fade to black. 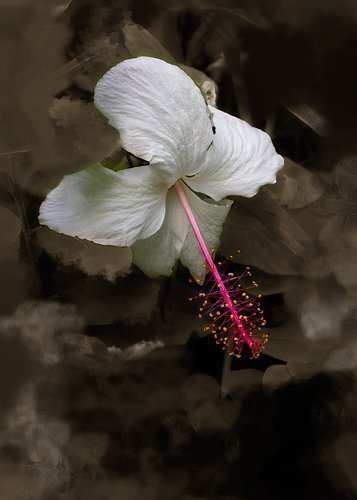 There are many different colors of Hibiscus in Hawaiʻi. In our yard we have some beautiful examples of the varieties that grow in the Islands. In the 1920’s, all Hibiscus were designated as the Territory of Hawaiʻi’s official flower. It wasn’t until 1988 that the endemic yellow Hibiscus, Pua Aloalo, or maʻo hau hele, was declared to be the only Hibiscus to be the state flower.

The many varieties and colors of Hibiscus that now live here are Chinese hybrids native to East Asia.

One other endemic Hibiscus in Hawaii is the Kokiʻo Keʻokeʻo or white hibiscus. The endemic varieties were here before even the first Polynesians came.

I photographed this flower at Nā Pōhaku o Hauwahine, a state park reserve that is being replanted with endemic, indigenous and canoe plants. The park includes easy-to-maneuver hiking trails where you can enjoy the plantings as well as spectacular views of Kawainui Marsh, Kailua Town and the Koʻolau Mountains.

When deciding how to present this image, I decided to show the white flower in full color but coming out of a sepia background. Since we associate the sepia look with something old, I used the background to indicate that the flower is coming from an ancient heritage.

To achieve this effect, the flower was lifted from the image and the background was then given a painted look and sepia effect. Capturing the flower to lift it out of the image meant hand painting, with a stylus pen, the flower petals, as well as all of the stigma and stamen.

I hope I’ve given you some ideas for your own flower photography. Ask your subjects how they want to be portrayed. Take time to study your subject and watch your lighting, focus and placement in the image.

Some thoughts about composition 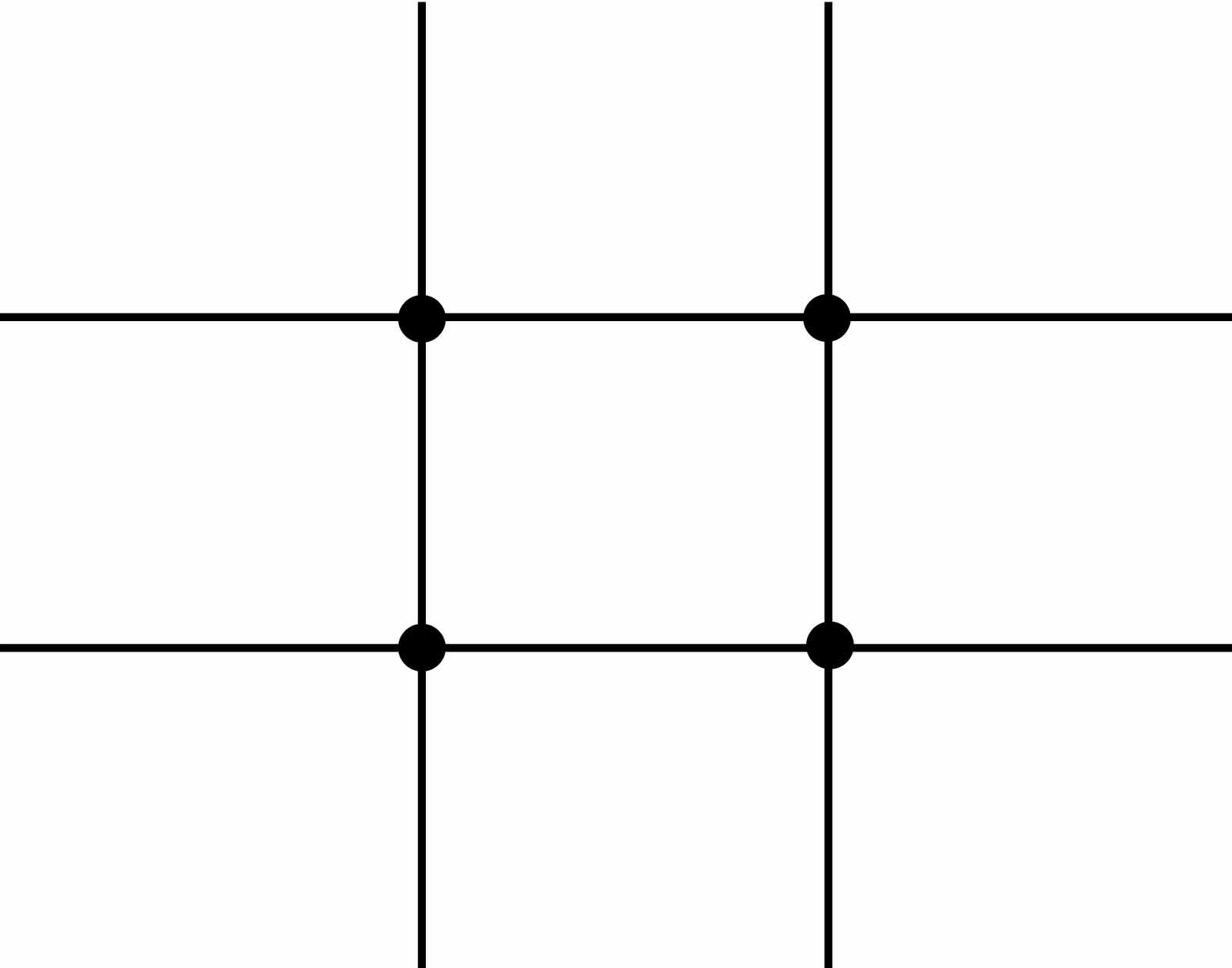 thirds horizontally and vertically. The important elements of your design should be along one of these  lines. The most important element or elements in your design should be placed at the intersections of these lines. By following the rule of thirds, you will know that your image is properly balanced. Now that you know the rule, also know that you can create beautiful photographs by not following it.

It is a rule that I generally follow but donʻt worry about when I break it. Visualize this grid over the pictures Iʻve presented above to see how I use the rule.

This entry was posted in Art, Photo Details. Bookmark the permalink.