My Hawaiian heritage tells me that I am the present in a living continuum that extends behind me to the beginning of time and the parent gods and leads to future generations. My life is not isolated. I rest on the shoulders of my elders, kupuna, and hold the future descendents, nā pua, in my hands.

Our kupuna can be those elders who are alive and to whom we look to for guidance. They can be those who have gone before us whose mana, their life force and influence, is still present. These kupuna are able to manifest themselves physically as an ʻaumakua to give us guidance or a warning. This physical appearance can be as an animal, plant, rock or any physical manifestation.

Many years ago, at a ceremony on a floating stage on the Spokane River, an elder of the Spokane Nation addressed the people assembled and said that, “My ancestors are watching us from the banks of the river. My ancestors are watching us from the  surrounding hills.” These words touched me deeply and I have always been aware of the living presence of those who have gone before.

When I visit a area where I want to acknowledge the presence of the kupuna, I offer an oli, a chant, to greet all who are present and tell them of my intentions in visiting and to ask their permission to proceed. I do this in Hawaiʻi and when visiting special places on the mainland.

It is a standard practice of mine when I head out on a bicycle ride on the many bike trails in Washington and Idaho. This recognition, of the elders watching, guided the image that is the header of this blog. The picture was taken along the Trail of the Coeur d’Alene’s in Northern Idaho. The image is a panorama taken in the late afternoon on a crisp Fall day. I wanted a beautiful image but also wanted it to have a message.

The idea came to me to break the lines in the image into a series of squiggles. Each squiggle could represent an elder who was watching us as we rode through this beautiful land where the Coeur d’Allene people lived for centuries.

Long before the French trappers and traders named then the Coeur d’Alene, the “Heart of the Awl”, because of their skill in trading, the people of this nation called themselves the Schitsu’umsh, the “Discovered People” or “Those Who Are Found Here.”

In honor of their ancestors, who watch over us, I named this piece “Land of the Schitsu’umsh.” 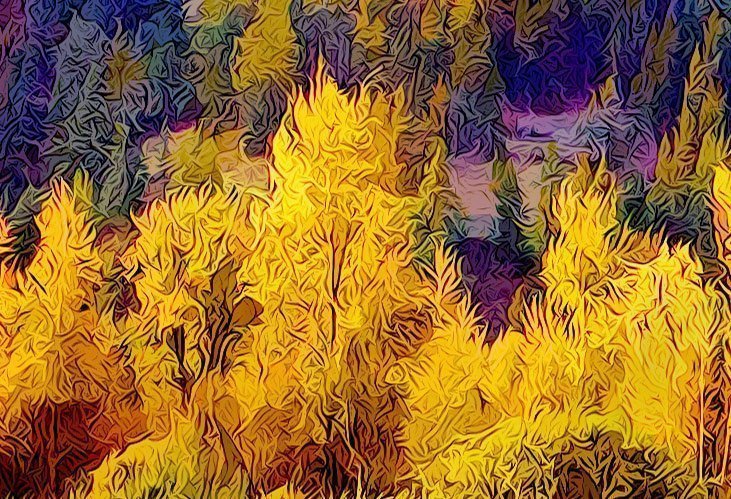 The final image is printed on canvas and layered onto Baltic Birch plywood. The finished size is 12.5 inches by 43 inches.

This entry was posted in Information. Bookmark the permalink.

1 Response to Land of the Schitsu’umsh