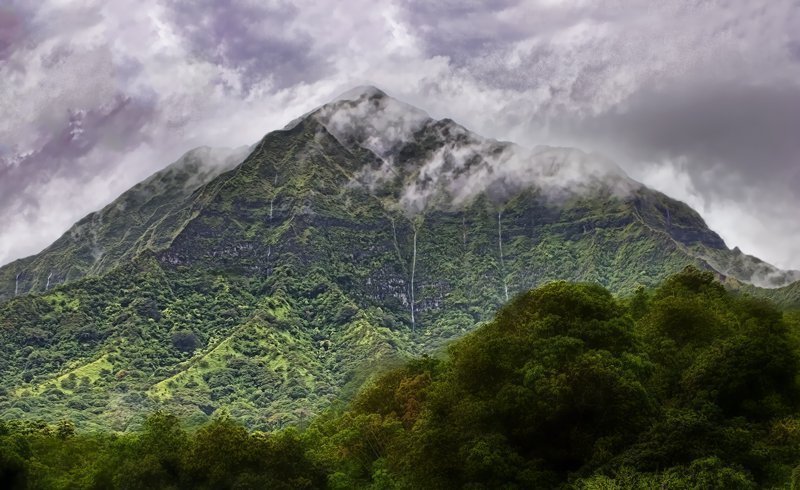 There is an ancient Hawaiian legend that tells the story of a giant who was very much in love with a maiden. She, however, wanted nothing to do with him. One version of the story is that this giant followed the maiden from the Island of Kauaʻi to the Island of Oʻahu. The maiden hid from the giant in the Koʻolau Mountains and he could not find her. In a fit of passionate anger, he reached into his malo (loincloth) and tore off his private parts and threw them at the mountain. They became the two highest peaks in the Koʻolau Mountains, as shown in the image below, which are above our town of Kailua.

Peaks of Konahuanui on a clear day

I grew up in the shadow of these mountains. Nearly every morning, as a youth,  I would look out our two story house window to gaze at them. Their many moods still draw my attention some 50 years later. In the morning, the sun can cast its warm glow on the dark lava formation with its uluwehi (lush green growth). Much of the time, clouds grace nā pali (the cliffs). Often the peaks are obscured. Other times it looks as if the mountains are wearing he lei ʻōpua (a garland made of a band of clouds). The sun sets behind these mountains often treating us to a spectacular silhouette.

There are those times, after a heavy rain, when you can see the many beautiful waterfalls that have sculpted the sides of the mountains over the millennia.  Often these waterfalls, when they appear, are hidden in the clouds. When they do appear, they can last but for a short time.

The rains had been heavy on this particular day and I knew there would be waterfalls. I drove the short distance to be closer to the base of this highest peak in the Koʻolau Mountains. I waited for about an hour as the clouds shifted and gradually drifted away to partially uncover the mountain and its waterfalls. Suddenly the clouds behind me opened and the sunlight kissed the base of the mountain accenting the light green areas.

Transferring the scene to the image

When I processed this image, I wanted the clouds to be dramatic so as to convey the energy that was released in bringing the rain from the ocean to the slopes of the mountain. Those who know me, know that I like to speak to my images and learn from them how they should be presented. What spoke to me in this image were the light green areas accented by the breaking sun. These patches look smooth and inviting from a distance but are actually a tangled, thick mat of Uluhe (False Staghorn Fern) which is native to the Hawaiian Islands. These Uluhe patches can be from 3 to 5 feet thick.

Uluhe patch in the mountains 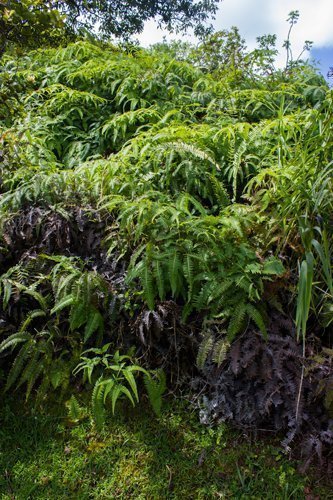 Uluhe can grow up to 10 feet when climbing

Closeup of Uluhe detail in image

To convey the reality of the tangled mass that Uluhe is, I used the same technique that I used in the Land of the Schisu’umsh image, the image in that post, turning straight lines into curly ones. (See the post for December 21, 2013) This mimics the twisting of the Uluhe you can see in the closeup photos above. This effect was then painted out of all of the waterfalls so that they would stand out.

This finished image comes in various sizes and is printed on canvas and layered onto Baltic Birch in what I call our Cennini Finish.

The piece is called Tears on Konahuanui. The tears are for a giant’s lost love and the sadness over his rash act done in a moment of frustration. The name of the work comes from the name of the Mountain peak, Konahuanui, His Giant Testicles.

PS. There are 8 waterfalls in the image. Some waterfalls have multiple segments as the water fills pockets in the side of the mountain before continuing down.

Own your own copy of this image.

This image is available in our Ceninni print style. The image is printed on acid-free canvas with archival inks. It is then layered onto Baltic Birch plywood which is is specially treated to keep the print acid-free. The edges are artistically finished with Acrylic paints. The print is ready for hanging with no framing required.

It is available in the following sizes: 9″x15″ and 19″x29″. Each print is individually made and no two will be identical. Prices include Free Shipping.

Tears on Konahuanui 9x15 Ceninni Print
This piece is Gicleé printed on canvas and mounted on Baltic Birch Plywood for stability and strength.
$124.00

Tears on Konahuanui 19x29 Ceninni Print
This piece is Gicleé printed on canvas and mounted on Baltic Birch Plywood for stability and strength.
$385.00

You may also order folded note cards of this image. Each card is individually Gicleé printed on acid-free cotton paper with archival inks and signed personally by Herman.

Tears on Konahuanui, 5 1/2 x 7 1/2, 6 Pack Note cards
There are 6 cards to a pack. These cards are archival and suitable for framing. Price includes matching cotton envelopes and Free Shipping.
$36.00
This entry was posted in Art, Photo Details. Bookmark the permalink.

1 Response to Tears on Konahuanui