The Creation of Art 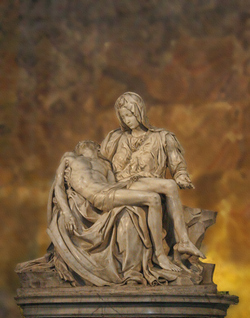 The Pieta in St. Peter’s in Rome by Michaelangelo

In every block of marble I see a statue as plain as though it stood before me, shaped and perfect in attitude and action. I have only to hew away the rough walls that imprison the lovely apparition to reveal it to the other eyes as mine see it.—Michelangelo

A copper and bronze cat by Sr. Paula

Lets sit a while and talk to it (the statue under construction) and see what it wants us to do. — Paula Turnbull SNJM

I make art out of things I find. I see something in them and start from there. My art is about how ideas come from what I see. — Thornton Dial in an interview in Garden and Gun Magazine

“Is this a painting?” I get that question a lot about my photographic prints. No. They are photographs. I do not try to make my photography look like paintings. What I do is to try and make them look like what my mind’s eye sees in the scene and what I hear from the image. That’s why I call my work “Interpretative and Impressionistic Photography.”

Ansel Adams once said, “You don’t take a photograph, you make it.” When I began my journey with photography about 60 years ago, you controlled how the final print would look by using different types of photographic paper. You “dodged” or “burnt” areas during printing to control the highlights and the shadows. You controlled the strength and temperature of the developer, stop bath and fixer. You added different chemicals to change the tones. You even retouched the negative and final print. All of this was the process of “making a photograph.”

Today, when I go outdoors to capture images, I think about lighting, contrast, positive and negative space, artistic design, placement and camera settings. This is an important part – taking the photograph. Without concentration on the artistic elements, you can’t make a photograph. You can’t make a silk purse out of a sow’s ear. This is also when I start a conversation with the scene to see if it has a message. Sometimes it does. Sometimes it doesn’t.

I am fortunate to have tools that I didn’t have for most of my photographic career. All of my finishing work is now done in a computer using Photoshop, various image filters and often just plain cropping after the rest of the work is done. Once the image is in the computer, I talk to it again. Sometimes it says “How about this, Herman.” Sometimes it simply tells me to hit the delete button. The conversation, here, begins with interpreting – what is the image saying to me – what do I see in it.  Different layers are added to the image. Textures are added to help convey the feeling of an element. Colors are tweaked to enhance or subdue. This is much like the process of an oil painter mixing the colors on a palette to a desired shade and using a different brush to change the texture.

Landscape Near Menton by Pierre-Auguste Renoir

I take my inspiration from the Impressionists of the late 19th century who broke free of the influence of Renaissance and Academic Art. They experimented with brush strokes, strong color and light. They took painting from the studio to the outdoors. In my opinion, they added a dimension of excitement to their work.

A lot of people have asked how I created the image that is at the header of the blog. Here it is:

It was a hot, late summer day while on a bicycle ride along the lower stretches of the Coeur d’Alene Trail in Idaho, that I saw these docks. Their colors reminded me of the Cinque Terre Towns in Italy where  buildings, with a mix of colors shining in the sun, parade down the streets and alleys. On Lake Chatcolet that day a light breeze was disturbing the water surface while not dislodging the haze from the grass fires in the area. And, the docks were parading like those buildings in the Cinque Terre. 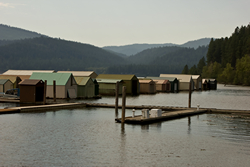 Original image of the Chatcolet Docks

As you can see from the original, the result was far from what my minds eye had seen. The haze cast a pall over the scene. But, the composition was good and the scene was talking to me with a loud voice.

I could use my computer to “paint” the scene as I had envisioned it. There are six layers that make up the final image. (A layer is a separate slice of the image where different effects are added. Layers can override specific areas or be blended with another layer to create a special effect.) These layers control the vibrancy of colors along with the light and contrast. There is one layer in there that I don’t know what I did, I didn’t identify the process. It was probably a layer to add texture.

I won’t be able to say what I’ve done in every step of every photograph because I don’t remember. Each work, each step is a conversation with the image. I don’t always record those conversations and so pieces get lost. That’s because I won’t use the same conversation again in a different image.

I see many different, beautiful photographs that people take of wonderful scenes. Sometimes, I wish I had taken them.  I love it when someone shows me their photography and talks about the emotion in the image.

I want you to look at my photography and ask, “What was Herman’s conversation here?”

This entry was posted in Art, Photo Details. Bookmark the permalink.

2 Responses to The Creation of Art