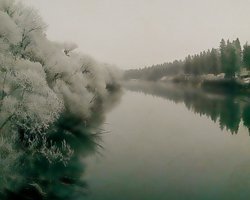 This has been a harsh winter in many places. Ours in Kailua has been wet and a little cool at times. Wow, it even went down to 63 one night. We had to put an extra blanket on the bed. I know. You’re thinking of writing and giving me static. I understand.

Actually, I did want to see snow this winter. We made a trip to Spokane for the holidays and I went looking for snow. It was hard to find when we first got there. The weather had been cold but no snow. I hadn’t even carried my camera with me when traveling because it was only cold and dreary.

Crossing the Spokane River one day, the above scene jumped out at me. It was cold and the ice on the trees was fluffy. A perfect picture – and no camera. We stopped and I jumped out of the car and took the above image with my tablet. You don’t need a fancy camera to capture an artistic image if you watch your composition. Here the river curves to add interest to the scene. The opposite shoreline joins the near shore in the distance with the effect of drawing your eye through the image.

I wanted to go on a snow-photography expedition with my friends Bob and Terry. The prospects of this were dim because of the lack of snow. My first photography outing was with Bob to the North side of Spokane near the Nine Mile Falls area. There was residual snow on the ground and in the hills. The following picture was taken during the blue-hour. While the time span is roughly a half hour after sunset and a half hour before sunrise, it is still called the “blue-hour”. Although our eyes compensate for the color of the light at this time of the day, the camera records the blue. So, if we aren’t paying much attention, our eyes will not see the blue and only see a dark image after a sunset is over. 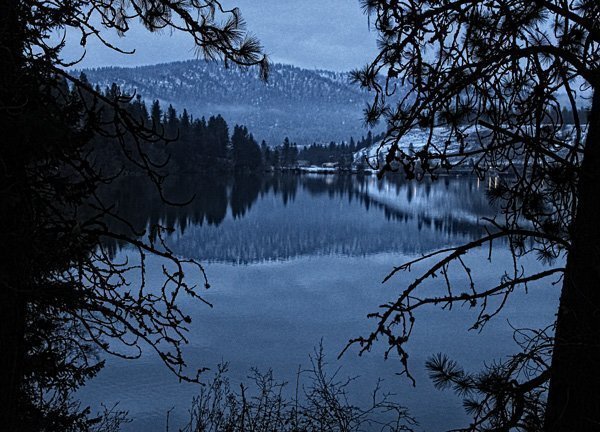 The blue color can add a lot of mood to a picture. I added texture to the print in the water,  hills and sky to make the image look colder. It’s like looking at a winter scene through a frosted window. You can feel the cold, even when you are inside.

One day, Bob, Terry and I headed to Idaho to look for snow. There was none along the highway even on Fourth of July Pass along Interstate 90 in Idaho. 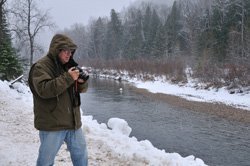 We went deeper into Idaho – to Cataldo, Idaho. Still no snow. We turned north and followed the  Coeur d’Alene River. Finally the snow started to fall.

We turned at Beaver Creek Road and headed up Dobson Pass and on in to Wallace, Idaho. Along the way we came across this idyllic old-barn, snowy-mountain scene. 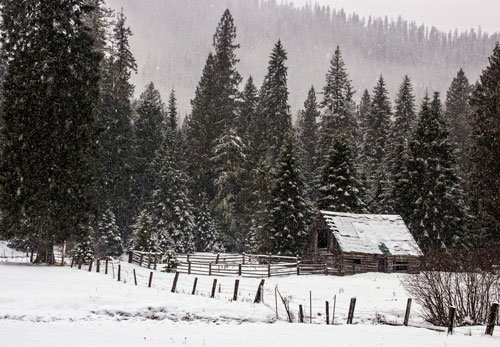 Winter on the ranch

It was snowing and the road was narrow. So, we took our pictures through the open windows from inside the car. It’s hard to see in a small internet image, but, when I processed the picture, I made sure you could see the falling snow. It’s another one of those times when  I want the viewer to feel the cold. This is conveyed by the snow on the ground, the falling snow and the fog in the background.

Near the top of the pass, at around the 4,200 foot level, we walked along a forest service road to enjoy the snow and the views. Here are Bob and Terry braving the elements. 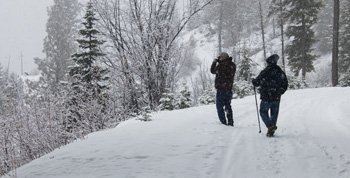 My favorite image from this winter was one of those that was about being in the right place and at the right time. Our family had driven to Davenport, Washington. The road travels through the then-frozen wheat fields of Eastern Washington. On the trip over, the fog was thick and the day dreary. I did not drive home as the fog was lifting and I was looking for a chance to take a picture, even without snow.

As we traveled, the sun was playing peek-a-boo through the fog. There was no time to plan anything. At the right moment, while traveling down the highway, the picture presented itself. Years of experience lets you know when the composition and cropping are right. 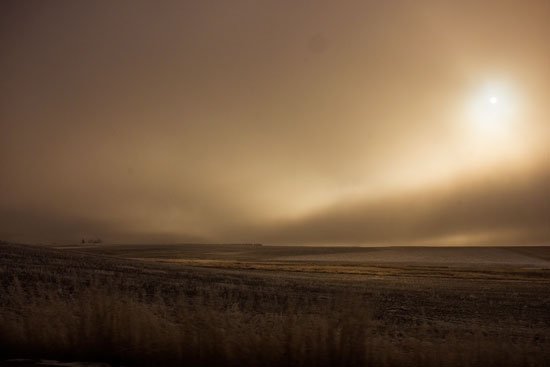 Breaking through the fog

I hope that your monitor is able to show the fullness of the sun, the subtle changes in the fog and the texture in the fields. There are many lines in the image that draw your eye all through the photograph, the nearby tall grass, the fallow fields, the shadows in the fog and the streaks of light that tell you that the sun is breaking through the fog.

My lesson for this post is to train your eye to look for the texture, design and emotion in the world around you. Capture the scene when it says the time is now. And don’t give up. With or without snow, beauty is to be found.

Thatʻs Hawaiian for “until we meet again”. Iʻm working on some really special Hawaiian images that I want to share. Donʻt know which one to start with.

This entry was posted in Photo Details. Bookmark the permalink.